We didn't get any snow in plymouth, so we went to dartmoor to find some....

And I made that gluten free cake. It was a bit dense, and sour (since I did a lemon drizzle topping)


Points:
Housemate envy: 6/10 (There isn't any left, but that might have been because there was a lot of us, and the snow makes you want to eat lots of cake. People thought it was an interesting thing - lots of questions)
Presentation points: 8/10 (Forgot to take a bloody pic of it whole. It was a bunt cake, which makes cake easier for picnics as there's no wispy bit in the middle to crumble.)
Yummy points: 7/10 (It's hard to judge as it was a bloody weird cake. But I had a fair bit as it was good enough for me.)


I also went to Exeter last night to see my friend Mary play, which was fab. 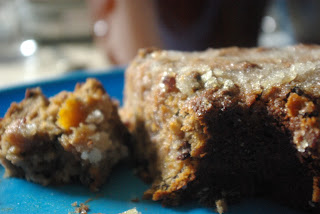 Followers - aka some beautiful people